Last February, the Signal predicted that President Barack Obama would win reelection with 303 electoral votes to his opponent’s 235–a prediction we made before the Republican party had chosen the identity of that challenger. This struck many people as absurd at the time: There were nine months of campaigning left, two conventions, several billion dollars worth of advertising, four debates, and untold bumps in the road for both sides.

As of 1 a.m. EST this morning, 50 of 51 of those predictions are correct, with about 60,000 votes separating the candidates in Florida. If Romney can win the state, the Signal will have gone a perfect 51 for 51. 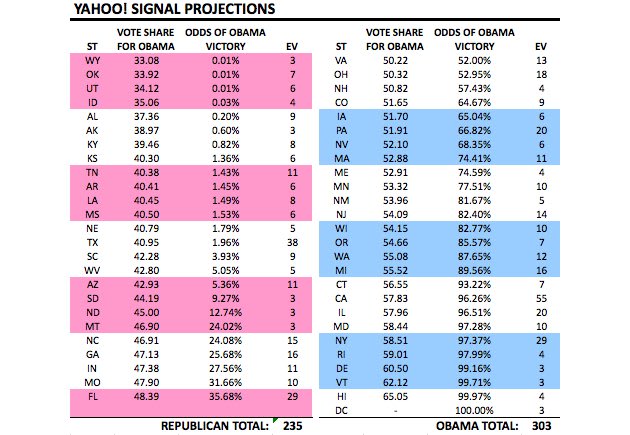 We point this out not to brag–mostly not to brag–but to say that it’s a vindication for the broad view of presidential elections: That they are the product of a complex stew of social and economic forces, not a contest between candidates and campaigns. At the time, the Signal’s prediction model included only one measure of public opinion: Obama’s approval rating, which stood at just below 50 percent at the time. The rest of predictions were driven by a model of those macro-factors–incumbency, economic growth and contraction, and so forth–that exist independently of the names and faces on the tickets.

Anyone can average a bunch of polls and call the election a week before it happens. In the end, it’s the models that tell us something about what forces influence election. We will talk in most depth over the coming days (with a minimum of gloating) about how our model maintained its consistency as it shifted to include more polls and prediction markets in the weeks and months that followed the initial take. But we are proud to have provided a consistant and correct message to our readers for the last few months.

Click Here for the Full Text on Yahoo!’s The Signal

The senate is almost wrapped up with just one more race left to play out.

12:40 AM: Forecasting that same sex marriage will win in all 4 elections: MD, ME, and WA legalized and MN not criminalizing. 12:20 AM: 2 senate seats are now looking more Democratic: Montana and North Dakota. 11:30 PM: For comparison, here